For the last few years, the internet has boiled in hot debate over sparkalay vampires who play baseball. I watched from the sidelines for a long time and actually found myself taking up the battle cry against the undead with diamond-shimmering skin…until a coworker called me a writing snob.

Well, I am a snob in a sense when it comes to the written word; the rising cost of books makes me want to shell out my money only for something of quality, and as a writer I constantly strive for the cleanest, sharpest prose I can wring from my talent. But still, her comment rankled. Was I such a snob that I would dismiss the vision of any author when I’m a writer myself? How would I feel if people did that to me?

It’s a valid question. As I gear up to begin my next novel, the third in a series, I’ve found myself gravitating toward vampire stories for background research. My vision for vampires is as untraditional as Stephenie Meyer’s, and I’m even nervous about giving it to my beta readers once I begin writing. Will they accept my vision…or will they want to kill my dream?

So I bought the Twilight series this last spring. I bought it and I read every word. I even watched the movie. I will be honest; I almost didn’t make it through the first book. Her style of writing drove me bonkers at first, and I found myself revising sentences from passive to active and selecting what I thought were more appropriate adjectives and adverbs. I railed at the injustice of such writing being splattered all over the NY Times Bestseller List until my husband, quite calmly, reminded me that she is published, so publishing professionals must have seen the explosive potential–and I’m still striving to have my manuscript read.

So I shut up and read. I had to take Writer Sharon and Editor Sharon and stuff them into a soundproof box, but I managed to read without the filter of prejudice from the writing (and reading) community. And when I finished the fourth book, I opened the first one and read them all again, this time turning Analytical Sharon loose, hoping I could determine just what made these books best sellers. A wondrous thing happened then…

I saw the magic of Stephenie Meyer’s vision. This woman had a dream–literally–which she set to paper and offered to the world. She went against traditional vampire canon which saturates even modern vampire trends. That took courage. The world gave her back praise and abuse, and she’s weathered both with grace.

I have some issues with the story (as a strong woman, I don’t understand passive codependent women; I am not a fan of adversaries so superhumanly invincible that humans don’t stand a chance against them; I actually LIKE Forks myself. I’ve been there several times on vacation, long before Twilight happened. It’s one of my favorite places on earth), BUT–

I can deal, because not all women are like me. There are passive codependent women; let them have characters with whom they can identify. Superhuman adversaries have their place in the world too. Not everyone likes the rain forest.

My point, which I’m taking the scenic route in getting to, is aimed at the writing community: we all have the ability to kill someone’s dreams or to make them soar. We can trash each other and rejoice when those around us 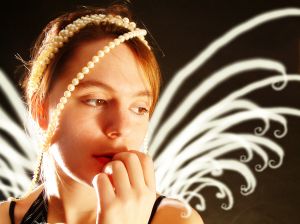 fail, or we can help each other and rejoice when our fellows succeed. Every success is proof-positive that the dream really can be achieved.

This doesn’t preclude being honest; I won’t blow sunshine up anyone’s ass and lead them to believe they’re better than they are and have no room for improvement. It would only be my opinion anyway.

But I’m not going to be anyone’s dream killer.