This post is part of The Let’s Talk Blogfest. I hope you enjoy the offering (which is from my first completed novel title The Wyckham House) and encourage you to follow the link and read your way through all the participants’ posts.

“You didn’t have to wait for me outside.” Taryn linked her arm through Kim’s and drew her inside the diner. “You’ve been ill; you should’ve come inside.” 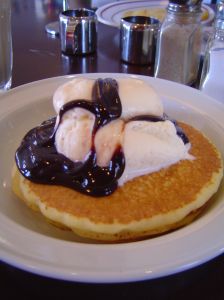 “Quite frankly, I’m sick of inside. I’m gonna have eight hours of it today, so I thought I’d get some air while I could.” She surveyed her friend and said with a hint of censure, “You don’t look so hot yourself. Sleep bad?”

“Sleep? What’s that?” Taryn asked, tongue-in-cheek, but Kim thought her answer was a trifle sharp and bitter.

Kim was greeted warmly by the hostess—the woman who had been with Melody Olmstead the day she’d come into the tavern with a bruised cheek—who lamented her two day absence and assured her that her favorite table was available, which elicited an amused look from her companion, who murmured “Come here much?” out of the corner of her mouth as they were seated. Coffee and cream were banged onto the table and the hostess gave her shoulder a squeeze as she left.

“Do you often have insomnia?” she asked after the hostess was out of earshot.

Taryn snorted. “No. But I often have man trouble,” she muttered darkly. “Enough about me. How are you feeling?”

“I’ll be better with some blueberry pancakes in me,” Kim confided with a grin. “I came here at least every other day until I got sick. I haven’t felt much like eating for the last few days.”

“Well, don’t hurl on the table. It will ruin my appetite, and like every other woman in the world, I eat when I’m stressed, so I’m really jonesing for a chicken fried steak.”

Kim gave her a sympathetic grimace. “So what did he do?”

“Works too much. Plays too little,” her friend replied shortly. “Loves too selfishly,” she added in an undertone. She blew her fiery bangs off her forehead with an impatient breath and snatched up her coffee, hiding as best she could behind the mug.

“Pretty typical for a guy, don’t you think? A leopard can’t change its spots, and face it, they’re all leopards.”

“Oh yeah? Not everyone still has on their just-fell-in-love rose-colored glasses, Pollyanna.”

“What do you mean by that?” Kim scowled at her.

“Oh please. A blind man could see how you feel about Ron. If it’s any consolation, I think he feels the same way about you, but good luck getting him to admit it. More luck on getting him to commit.”

“I believe you’ve already made that point once.” Kim lifted her own mug to hide her irritated frown.

Taryn covered her eyes with one hand and sighed deeply. “I’m sorry. I’m really snappy today. It’s not your fault and I have no right to be jealous. It’s just…”

Their server appeared then, and in the flurry of ordering the conversation was lost. Kim rather thought Taryn was glad of it.

When they were alone again, she said, “Why on earth would you be jealous of me? You can practically watch my heart break right before your very eyes.”

“I’d rather be realistic than hopeful.”

“We both know how this one will turn out. I’d rather talk about you and Denny and how on earth you’ve made a long-distance relationship work this long.”

Taryn’s hand dropped from her face. “You call this ‘working’? I was excited for him when he got into Quantico. I supported him through it all, even when he had to move to Philadelphia because that was the only opening in the Bureau.”

Kim gaped at her with sudden comprehension. “He’s FBI!” The bureaucratic hands, the capable, unflappable demeanor, the rudimentary medical training—all of it suddenly made sense…except why he was here in Mills working in a tavern.

“He was. Not anymore, at least that’s what he says. He poured most of his money into real estate—has several rentals in Philly along with a few here besides the ones he co-owns with Ron. It’s enough to keep him busy and in Philadelphia most of the time—except I know he has a property management company looking after them. Quite honestly, I don’t have the faintest idea what he really does or from where he really earns his income.”

“And he’s not talking,” Kim deduced.

“Only to tell me I’m being silly.” Taryn poured more coffee from the carafe and stirred a creamer into it. “When he went to Quantico, he promised that as soon as he was placed we would get married. Do I look like I have a husband?” She thrust her left-hand ring finger in Kim’s face to illustrate her point. “I asked him last night if he ever plans on keeping that promise. He got angry and said ‘Now is not the time to discuss it, Taryn.’”

“And I realized last night that he’s already married. He’s married to whatever he does when he’s not with me. I’m just a mistress—no, I’m not even that. I’m just a benny.”

“Benny?” Kim queried. It wasn’t a term she was familiar with.

12 thoughts on “The Let’s Talk Blogfest”