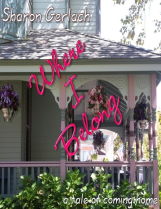 Warm spring mornings were what Sarah-Jane Haldemann loved best, when she rose before the rest of the house and took her coffee and a sketchpad out to the gazebo that overlooked the lower meadow. She would bask in golden warmth and watch the day begin and perhaps sketch what bewitched her artist’s eye.

Today the meadow was dominated by wild turkeys—a rafter of turkeys, Gus had told her they were called, and she had no reason to doubt him. She kept a wary eye on them as they traveled up the slope toward the gazebo; while they generally weren’t aggressive, being too used to people always traipsing about the grounds of Blackberry House Bed & Breakfast, they sometimes became annoyed if someone came too close or surprised them. Just last week, the one with the bent wing had chased Benjamin, her three-year-old son, and knocked him flat on his face.

Of course, she couldn’t deny that Benjamin had been throwing rocks and hit the poor thing’s sore wing. Still, being speared in the ass with a turkey beak wasn’t the most pleasant experience, and she knew that from firsthand experience. As did Benjamin.

She shifted a little to catch the right slant of light across the sketchpad, and took up her charcoal pencil. Her fingers deftly captured the rafter of feathered cacophony as it gained the top of the slope and headed toward the gazebo. A bold stroke here, a smear there. Adding shadow and light came so naturally that if asked to explain how she could so easily make a scene three-dimensional, she would be unable to answer. She drew not what she saw with her physical eye, but what her brain interpreted and fed to her artist’s creativity. And she had a full week before the inn opened, a week in which to capture the awakened earth and translate it onto canvas or the drawing pads she purchased by the case.